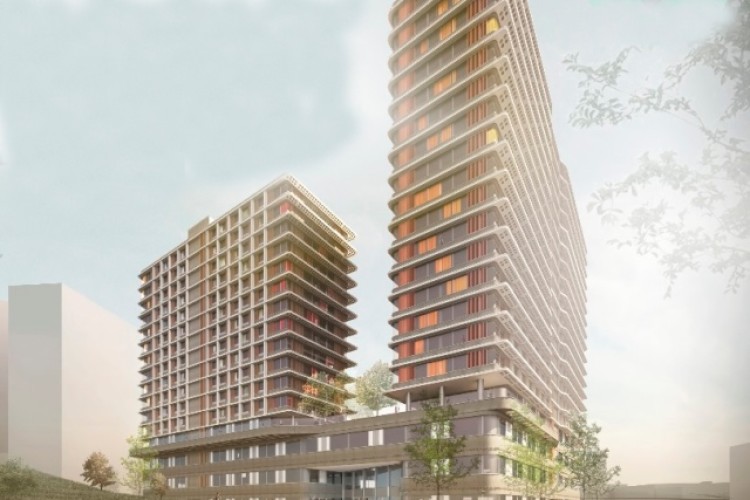 Stelrad Radiators is delighted to be supplying nearly 1,000 of its sector leading radiators to share heat around a major new educational development that is part of seeing UCL – University College London – expand hugely over the next ten years.

University College London – which operates as UCL – is a public research university in London. It is a member institution of the federal University of London and is the second-largest university in the United Kingdom by total enrolment and the largest by postgraduate enrolment.

UCL’s ambitious expansion programme is creating a world class academic and research centre in the heart of Queen Elizabeth Olympic Park in East London – site of the London Olympics. Once completed the finished structure will comprise of 5,500m2 of world leading academic research laboratories combined with two towers of 524 individual accommodation units housing the 4000 students who will study there.

The two new buildings are part of Transforming UCL, a £1.25bn ten-year programme of investment in UCL’s estate across London to support the University’s continuing growth.

Stelrad won the contract to supply radiators for the heating system in the new buildings and is supplying 880 of its impressive flat fronted Planar K3 radiators and a further 56 of its leading Low Surface Temperature radiators.

Stelrad has seen its radiators specified for a large number of educational establishments in recent years, in universities, colleges and schools. Models selected vary according to the project but many have seen its low surface temperature range chosen whilst others have gone for the up market options from the company’s designer and decorative ranges.

“It’s very encouraging to see the orders coming in for these projects,” says Stelrad’s Sahil Patel, Specification Manager for London, Essex, East Anglia and Cambridge. “There is clearly no doubt in the minds of specifiers that radiators can do the job of sharing heat around these types of buildings and keep their students warm in the colder months of the year. It’s just another example of our radiators being fit for the future and being the number one solution for heating projects whatever the source of the heat in these developments.”