Leading radiator manufacturer Stelrad has donated a number of its sector leading radiators to the latest DIY:SOS project, undertaken by Nick Knowles and The Big Build team – Billy, Mark, Chris and Jules – with the help of the generosity of the local community with tradesmen giving their time for free and suppliers providing products required to complete the project in just nine days.

The project was undertaken in Bolton in Lancashire, where the team helped the Taylor-Mann family – dad Martin, mum and full-time carer Heather, daughters Scarlett aged 8 and Penelope aged one and their son William who is nine and suffers from a very severe form of Autism.

Due to the nature and severity of Williams’s condition he is extremely hypersensitive to noise and being in such close proximity to his siblings was often just too much for him to bear. William is unable to talk and cannot communicate this by any other means than crying and becoming distressed. He finds sleeping extremely difficult and is often awake throughout the night, which is impacting on his sisters as he continually disturbs them. William’s severe condition also means that he is not aware of danger and actively attempts to climb through the upstairs windows, despite Martin’s and Heather’s best attempts at securing the handles. He also turns the taps on in the upstairs bathroom leading to numerous floods in the house. William cannot be left unsupervised upstairs for his own safety and the risk of causing further damage to the house.

Martin had started the process of making a third bedroom upstairs with the intention of William having his own room, with Scarlett and Penelope sharing. He had cut out a doorway and erected a stud wall, but due to financial constraints and trying to fit the work around his job, as well as helping Heather care for William, meant he has been unable to progress further. This meant that William has had to share a bedroom with eldest daughter Scarlett,  leaving Penelope sharing a room with Martin and Heather. William clearly needed his own space that would be quiet and calming.

The family’s current house was unfit for purpose and a massive strain on family life.

The house needed a downstairs extension, under permitted development, with all the bespoke care provision that William and the family needed, including separate bedrooms, a calm space for William, a social space for the family and ‘safe proofing’ for the entire ground floor and rear garden.

Stelrad responded to a plea from the DIY:SOS team for eleven radiators and two towel radiators. Eight of Stelrad’s Column radiators including three vertical radiators, along with three Softline Compact radiators and two Slimline towel rail radiators now adorn the revamped house that now perfectly meets the needs of this deserving family.

“We were delighted to be able to help with this project, providing a number of our high quality radiators to provide the warmth in the home to keep the family comfortable in the colder months,” said Stelrad’s Head of Marketing, Chris Harvey. “It’s another compelling story that demands that we helped the DIY:SOS team to provide the home this family needed.” 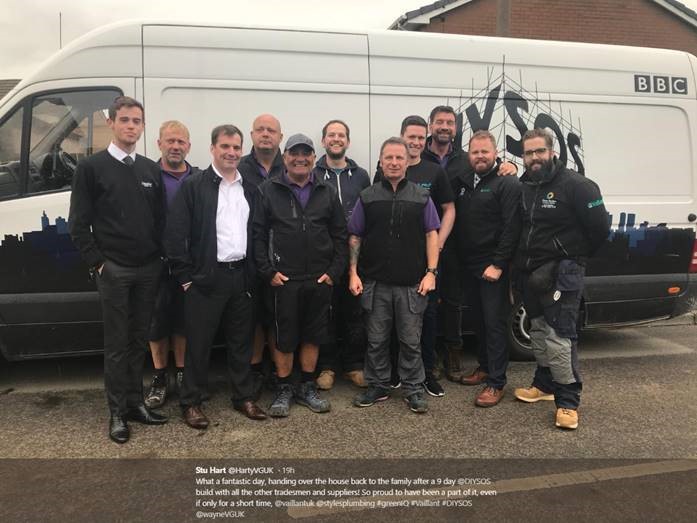